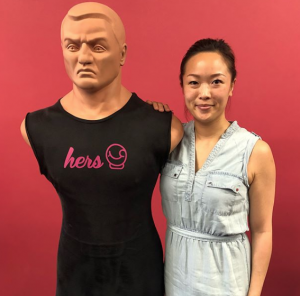 Amy Chan is a busy lady.  Not only does she have a baby boy to take care of, she also works three jobs.  She manages an oral surgeon’s office, works at a local optical store, and is developing an app.  Whoa, talk about a juggling act!

Amy had a multitude of exercise choices before deciding that HERS was the one.  She was a part of the Good Life family as well as L.A. Fitness. She wanted to go back to Good Life during maternity leave because she really liked Body Pump and Body Combat.  The hitting and kicking in Combat were exhilarating, but the air punching lacked the pushback that martial arts usually gives. You want to feel resistance when hitting someone, don’t you?  Now, L.A. Fitness had a pool and Amy enjoyed swimming, but it was a lot. Her husband suggested she choose one because three jobs and three workout places was a bit much. When could she squeeze in family and “Me Time?”  Amy knew he was right so she had to narrow it down.

She started off with a three-month package at HERS and then another three-month package.  She saw some results, but that stubborn layer of fat refused to burn off. Still nursing, Amy couldn’t cut out too much from her diet or over exercise.  She still needed to make milk for her son so she decided to take a break.

In April, she returned for the 28 Day Ready, Set, Slim Challenge and brought a friend with her.  Her goal wasn’t to win the $1000 Grand Prize, but to push herself back into a regular routine and to fit into a special outfit for her June birthday.   She not only won the jackpot, but lost 16 inches, 9.1 pounds, and 7% in body fat while gaining muscle in the process. Her winning way? She went for what she said were “easier” classes for her during Week 1 such as Rhythm and then upped her goals for Week 2.  She did Upper Body Burn during Weeks 3 and 4 where she realized she gained a lot more strength than she thought she would.

By the end of the month, she noticed definition and muscles where she had never seen them before.  She could do push-ups with ease. Most importantly, her clothes fit well and her confidence level had risen.  This was not to say that the challenge was easy for this strong lady went 27 out of 28 days! INCREDIBLE!

Going out with her friends meant watching people eat rather than devouring those dishes herself.  She had a very small portion of Thai food once when out celebrating and she was strict about her meal planning.  At the new poke restaurant, she watched everyone devour their meals while she just engaged in conversation. Even for Mother’s Day brunch, she had to hold back because she didn’t want to feel guilty after or have wasted all her efforts.  Amy learned to count her calorie intake and made smarter choices with more veggies on her plate and swapped out regular bacon with turkey bacon. Protein shakes after each workout were a must. “The diet just depends on how persistent you are,” said Amy.

Amy used her heart monitor to stay in the red zone for her workouts and maintained her competitive streak by listening to her body.  She would take it easy at times and just listened to her brain. Caity and Suzanne were there for every step. “It was motivation from them… all the yelling,” she laughed.  It pushed her towards her goal and it certainly looked like it worked. Great job, Amy! Keep it up. Next goal? 364 out of 365 days? Wouldn’t put it past you!