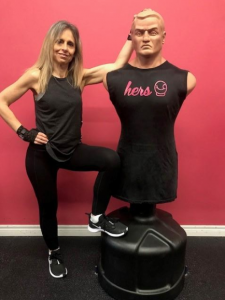 Rosanne is a woman who is always on the go, and even our interview had to be done on the road as she headed for a HERS class. How fitting!

It was in January of this year when Rosanne said to herself – I can’t let age and a busy schedule take my health away from me. Turning 49 in June, Rosanne was looking for something special and unique to hold her interest. Many of her friends found the exercise routine that kept them committed but trying many different programs herself, they just didn’t keep her motivated. She wanted power. She wanted spirit. She wanted something that would keep her wanting more.

Since Rosanne had done taekwondo in her 20s, she knew that a part of her loved the physical punching and kicking of a workout. Her inner martial arts dynamic was calling so she discovered HERS and wanted more information. Naturally, she called Anthony and asked him why HERS? What can it do for me? Anthony (being Anthony) didn’t hard sell Rosanne, but simply told her about a community of women who loved the studio and who all attended for a common cause: themselves. That was all that was necessary to get Rosanne curious.

This mom of two took a strong stance and thought about her future. She thought as senior one day; the options would be to either A) Travel, B) Continue working C) Enjoy family life or D) Not be healthy enough to do any of the options (D – was not going to be part of her future).

With her two kids being active themselves, Rosanne wanted to continue keeping up with them. She made that a priority and with Caity’s help, she began to make changes in her diet. The January Resolution Program set her up for what to watch out for and she learned that her body needed to reset itself. She needed to detox and learn to understand what her body needs. Caity gave her that outlook and all the instructors at HERS kept her going. She lost 23 pounds in 4 months.

“Embrace what you want to become. Embrace who you are.” She now feels empowered and healthy not only for herself but for her kids as well. Go go go, Rosanne. Bravo!