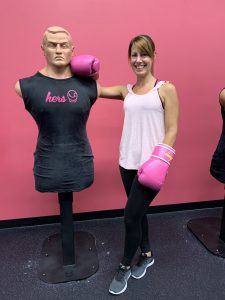 Zoey is a seasoned Educational Assistant and a newly certified teacher from Trent.  Graduated in June 2019, she is now back home to Markham and to her beloved studio.  She started her HERS journey early on and is an original member of our Markham location.  Back in March 2016, Zoey was seeking something different in her life. She was going through a trauma and her colleagues mentioned trying something new.  Up for anything and change, Zoey gave kickboxing a try. Yoga had been her thing, but it was too slow. She loved it at first, but soon just wasn’t feeling it.  Zoey was always into fitness (you would know just by looking at her), but her adrenaline levels weren’t up to where she wanted them with a program like yoga and soon she found herself bored with the experience.

Her friend and colleague, Ruby, brought her to the studio and said, “Give it a try!”  From the moment the music turned on to the first punch she threw, Zoey was hooked! She knew that her life needed the pounding beats and kicking B.O.B.’s ass.  Her instructor was Paul and he has since moved on, but he was the one that set her on the path to fitness kickboxing and she hasn’t veered since. In fact, when Zoey left for a bit to do her teaching degree, she felt a big chunk missing.  Nothing was comparable and she felt withdrawal. The school gym wasn’t the same and besides looking forward to coming home on the weekends for family and friends, she really just looked forward to classes: Booty Blaster, Super Sculpt, you name it.  Zoey was IN!

Zoey’s personal journey began in 2013 when she was diagnosed with cancer for the second time in her life.  She went through difficult surgeries and in February 2014, her treatment ended. She thought she just needed to focus on her physical healing when in fact, a new bomb was to be dropped on her.  Her common-law relationship of thirteen years was ending. She discovered her partner had been unfaithful and that “just shattered” her and turned her world upside down. She was deep in sadness and grief.  She could barely keep afloat. Finally crawling out of a dark hole, she was able to go out again and find herself. Finding a nearby studio at this time gave her the power to feel strong and confident once again.  “I regained control of my feelings. I was empowered and regained my confidence,” she now reflects. “It took time. Everybody at HERS is supportive and the members are like family. Not once have I felt any kind of negative vibes.”

Besides feeling healthier mentally, Zoey has noticed a jump in her physical strength and endurance.  She remembers not being able to do jump lunges or lasting through Cardio Chisel. “I can now go through it, no breaks,” she says proudly.  Her focus was never about weight loss so uses her wardrobe as a measuring factor. She is in it for the toning and it certainly shows. #goals

What HERS has done for her is beyond a scale measure, she says.  She has a great mind, body, and soul connection for her experience.  She didn’t realize the benefit of mental health at the gym until she really let loose on B.O.B.  The magnitude of stress relief gave her such positive gains in her life. She is now happily engaged and will walk (maybe she should strut) down the aisle next year.  Happy days ahead, Zoey! You deserve it!