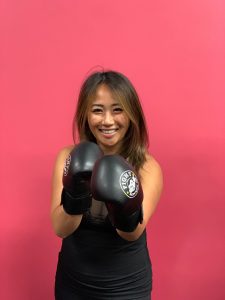 Vanessa joined HERS for a reason, unlike most clients I’ve interviewed.  The spunky single 32-year-old and I met a couple of years ago when we shared our love for all things Disney (she loves Baymax from Big Hero 6).  She ventured off to Disney World, on her own, adventurous and excited. I had no idea then what she was truly battling. Inside, Vanessa was overcoming a hurtful experience, but no one would know it from her grin and vigorous roundhouse kicks.

She recently took a six-month hiatus to recover from surgery on her neck and ribs.  Suffering from a pain disorder, Vanessa lived with discomfort most of her days. A former executive assistant at Markham-Stouffville hospital and now an executive assistant at CIBC, Vanessa spends most of her day at a desk.  Sitting all day put tons of pressure on her spine so HERS was exactly what she needed: movement. She certainly got it at a wide variety of classes. She needed the physical exertion to get some things off her mind.

Vanessa’s story of how she came to HERS began with a relaxing massage.  The massage therapist took advantage of the situation and her massage quickly turn into a nightmare.  It became a “he said she said” situation where the guilty were acquitted. Vanessa had the support of her boyfriend and close friends throughout the trial, but still, it was frustrating and disheartening.  How could this happen? Why did it happen?

As Vanessa tried to sort out her feelings, she drove by the studio.  The promo on the big sign drew her in and as she has tried an all women’s boot camp before, she felt this would be a good fit for her.  Right then, she needed to feel safe. She wanted to feel better. She needed to be surrounded by a community of women. What she wanted was to feel empowered.  Vanessa had been in “the best shape of my life” at a previous boot camp so HERS seemed ideal into getting her to that place in her life again.

For the 45 minutes of any class (she loves them all, but the uppercut combos with quick squats are the most challenging), Vanessa is in her own mind.  This is HER time. She can focus on the combos and her growth mindset is to get toned and get stronger. For her, it isn’t about weight loss, but about healing.  She follows Coach Caity’s mantra of “the heavier you lift, the more you burn.” She now lifts her 12-pound weights with pride as she has visibly shown improvement over the years.

Although what happened to Vanessa is a tragedy, she does not remain a victim.  She quickly spoke up. She enjoys her life and maintains an active lifestyle with skiing, swimming, and teaching children how to skate at the local community centre.  She goes to HERS at least three times a week because “HERS is therapeutic to me.” Coach Caity has been with Vanessa throughout a lot of it and her consistency in checking on her before and after class helps a lot.   During class, Caity’s voice gives her a gentle nudge to keep going when she feels like she is almost out of gas. Her rhythmic clapping drives Vanessa to give it that much more near the end. Another coach Vanessa has really connected with is the new coach, Cheryl.  “She calls me out and gets to know the girls,” Vanessa said. “She tells us to ‘dig deeper’ so I do.”

Vanessa believes that HERS is a good step for anyone along on their own journey.  It isn’t going to “save” you, but the coaches are caring and if you have struggles, they will help you.  It isn’t just about weight loss. It is about healing mentally. It is a workout, but you can make it what you want.  Personally, I think Vanessa’s journey has just begun and she will have many happy adventures in the future. We are happy to be a part of your story.  Thank you for sharing.

If you are ready to tell your story to the HERS family, please contact Yvonne at the studio.